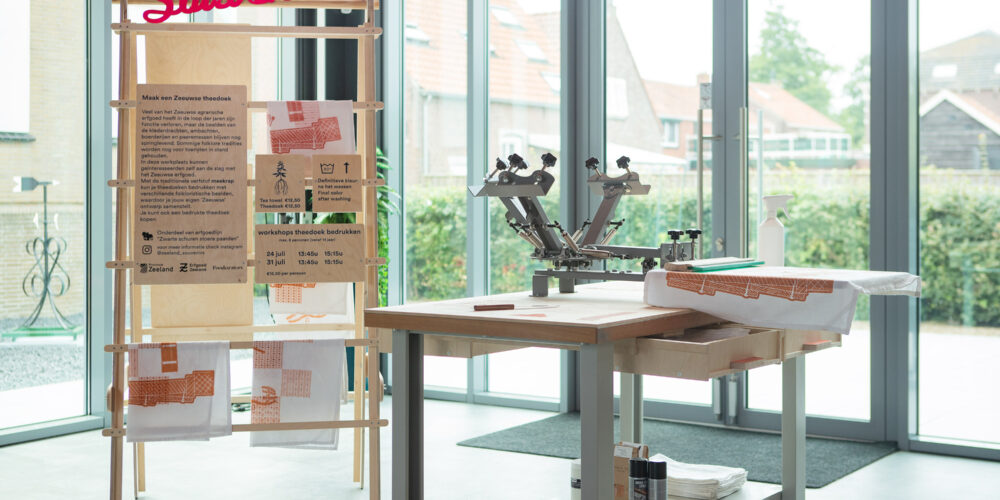 Much of Zeeland’s agricultural heritage has lost its function over the years, but the images of traditional costumes, crafts, farms and ‘paeremessen’ are still very much alive. Some folkloric traditions are still maintained for tourists.
In this workshop, curious visitors can have a hands-on experience with Zeeland heritage. Using a special ink made from madder, a traditional plant dye of this region, you can print tea towels with different folkloric images, creating your own ‘Zeeland’ design.

When on holiday, we are annoyed by (other) tourists, because they disturb the illusion of authenticity of a destination. But can we even define authenticity in tourism or travel?

As with a lot of heritage, Zeeland’s agricultural heritage has lost its original function and instead became folklore in the 20th and 21st century. Folklore often is capitalized for tourism purposes, sometimes leading to less historic accuracy in favor of financial gain. In regional costumes this is very apparent: images of women in traditional regional costumes are displayed in every touristshop, on many souvenirs, often without a relevant link to the rich and diverse history of these regional dressing codes. The image of Zeeuws Meisje (Zeeland’s girl) in a traditional dress and hat can be found on many products ranging from umbrellas to candies.

What value do we still find in heritage, if we are forgetting the context and only focus on preserving the image? MeekrapLAB tea towels is a screenprinting workshop in which tourists are invited to make their own souvenir. With several designs to choose from (or combine) they can create their own image of Zeeland’s heritage. The images themselves serve as an informational layer more than just an image. They show a bit of background knowledge behind Zeeland’s most exploited heritage images?